Each of these different residence titles may entitle its holder to obtain different kinds of social benefits from the German state.

Germany’s social welfare system provides many social benefits to German citizens and foreigners living in Germany. Some of them are:

SGB II: SGB II is the abbreviation for the Sozialgesetzbuch II (German Social Security Code II) which determines the basic financial security benefit for employable job seekers in Germany. The term “SGB II” is therefore used colloquially to describe this kind of basic financial security benefit. The SGB II is paid to unemployed people in Germany who are in need of support because of their current unemployment status and their life situation. According to the SGB II a person in need is entitled to receive a monthly allowance and the SGB II also covers the costs for accommodation and heating.

AsylbLG: The AsylbLG is the abbreviation of the Asylbewerberleistungsgesetz (German Asylum Seekers Benefits Act). The AsylbLG is a separate rule for social benefits, apart from the Second and Twelfth Book of the Code of Social Law (SGB II and XII), described above. Benefits according to the AsylbLG may be obtained by foreigners who reside in Germany and are asylum seekers or civil war refugees. A recent judgment of the federal constitutional court in Germany (“Bundesverfassungsgericht”) held, that the provisions governing the basic cash benefits provided for in the Asylum Seekers Benefits Act were unconstitutional. Asylum seekers or civil war refugees are therefore entitled to get more money under the AsylbLG.

Child benefit: Child benefits (“Kindergeld”) are monthly payments of the German state to a child’s parents or it´s legal guardian. The amount of the payments depends on the ages and the number of the children in the household.

BAFöG: BaföG stands for Bundes-Ausbildungsförderungs-Gesetz (Federal Education and Trainings Assistance Act for students in Germany). The Aim of the BAföG is to give all young people the possibility to study independent from their social and economic situation. Besides German students many foreign students may be entitled to obtain payments under the BAföG.

Housing allowance: Housing allowance is a subsidy paid to lower-income tenants and owners, if the amount of their rent or the burden for acceptable accommodation overburdens the economic capacity of their household. 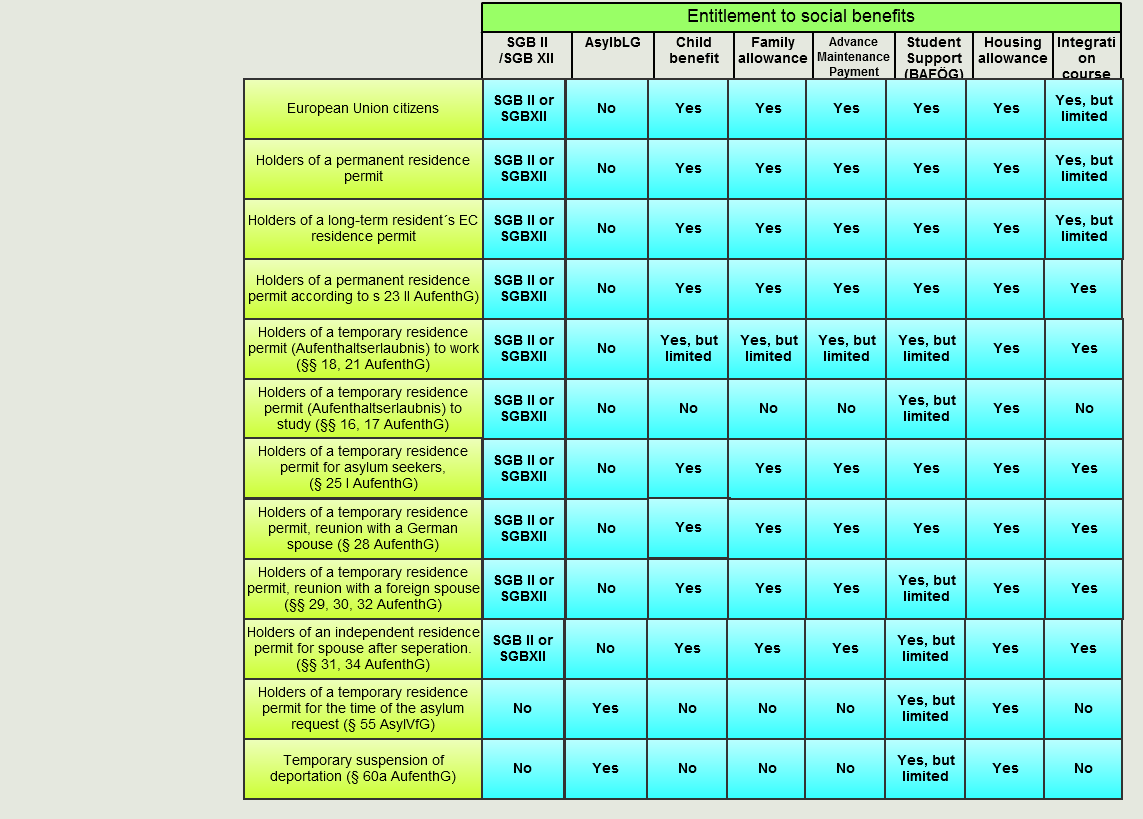